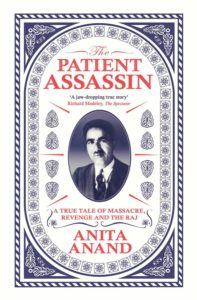 When Sir Michael O’Dwyer, the Lieutenant Governor of Punjab, ordered Brigadier General Reginald Dyer to Amritsar, he wanted him to bring the troublesome city to heel. Sir Michael had become increasingly alarmed at the effect Gandhi was having on his province, as well as recent demonstrations, strikes and shows of Hindu-Muslim unity. All these things, in Sir Michael’s mind at least, were a precursor to a second Indian Mutiny. What happened next shocked the world. An unauthorised political gathering in the Jallianwala Bagh in Amritsar in April 1919 became the focal point for Sir Michael’s law enforcers. Dyer marched his soldiers into the walled garden, filled with thousands of unarmed men, women and children, blocking the only exit. Then, without issuing any order to disperse, he instructed his men to open fire, turning their guns on the thickest parts of the crowd. For ten minutes, they continued firing, stopping only when 1650 bullets had been fired. Not a single shot was fired in retaliation.

According to legend, a young, low-caste orphan, Udham Singh, was injured in the attack, and remained in the Bagh, surrounded by the dead and dying until he was able to move the next morning. Then, he supposedly picked up a handful of blood-soaked earth, smeared it across his forehead and vowed to kill the men responsible, no matter how long it took.

The truth, as the author has discovered, is more complex but no less dramatic. She traced Singh’s journey through Africa, the United States and across Europe before, in March 1940, he finally arrived in front of O’Dwyer in a London hall ready to shoot him down. The Patient Assassin shines a devastating light on one of the Raj’s most horrific events, but reads like a taut thriller, and reveals some astonishing new insights into what really happened. .

‘Reads like something from a thriller…colourful, detailed and meticulously researched account…the book really shines in evoking the fevered atmosphere of India in the late 1910s and early 1920s.’ Dominic Sandbrook Sunday Times

‘Anita Anand’s remarkable and brilliantly researched non-fiction thriller, The Patient Assassin: A True Tale of Massacre, Revenge and the Raj, [is] well-written, contains new research and breaks much fresh ground… Anita Anand focuses on one extraordinary story that had never been properly told before. Through some remarkable research in archives around the world, Anand has reconstructed much of [Udham Singh’s] life.’
William Dalrymple Spectator

‘Gripping from start to finish. Anita Anand is brilliant guide who brings a series of extraordinary – and important – stories to life in this remarkable history.’
Peter Frankopan Author of The Silk Roads

‘A jaw-dropping true story…Udham Singh [survived] the massacre [at Amritsar] and swore vengeance. Like a real-life Tom Ripley, he assumed multiple identities and bided his time…and shot the former governor of the Punjab through the heart at point-blank range. Rough justice; brutally poetic.’
Richard Madeley Spectator

‘Anand has turned her meticulous investigative journalism to tracking the life of the formerly shadowy Singh… [she] lures us into an irresistible narrative. It is an engaging story that reads satisfyingly more like a shadow world conspiracy thriller than the exhaustively researched piece of reconstruction that it is.’
Rachel Holmes Daily Telegraph

‘A dramatic, fast-paced narrative … Anand does a meticulous and determined job in tracing [Udham Singh’s] steps and debunking more than one theory about him. Anand produces an engaging account of the times and of this unlikely hero. And though gripped by her subject, she does not shirk away from his human failings.’
Manu Pillai New Statesman 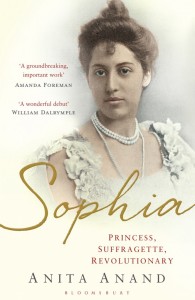 The true story of an Indian Princess in the British court, weaving through the most important episodes in British and Indian history.

In 1876 Sophia Duleep Singh was born into royalty. Her father, the Maharajah, was heir to the Kingdom of the Sikhs, a realm that stretched from the lush Kashmir Valley to the craggy foothills of the Khyber Pass. It was a territory irresistible to the British, who took everything, including the fabled Koh-i-noor diamond.

Exiled to England, the dispossessed Maharajah transformed his estate in Norfolk into an Indian palace replete with exotic animals. Sophia, god-daughter of Queen Victoria, was raised a society lady. But after traveling to India, against the wishes of the British government, she returned a revolutionary, committed to Indian Independence – and the fight for female suffrage.

She battled with police in the midst of riots, refused to pay her taxes, spoiled her census papers in protest and publicly supported arsonists who were terrorising Britain. Sophia threw herself at the Prime Minister’s car and attempted to get arrested on several occasions, so embarrassing King George V that he was forced to exlaim “Have we no hold on her!”

This book is about her extraordinary life.

‘Sophia is the sort of remarkable, almost unbelievable untold true story that every writer dreams of chancing upon. A wonderful debut, written with real spirit and gusto. Anita Anand has produced a winner.’
William Dalrymple

‘A groundbreaking work that at last tells the important story of Sophia Duleep Singh: unflinching princess-in-exile, doughty moderniser and tenacious suffragette. From the streets of India to the corridors of power, Sophia artfully examines the tensions between East and West; and one woman’s choice between fighting for freedom and staying silent.’
Amanda Foreman, author of Georgiana, Duchess of Devonshire

‘Anita Anand has definitively restored to history one of the most important and charismatic figures in the suffragette movement. This thoroughly absorbing and deftly informative account instantly pulled me into the irresistible adventure and vitality of Sophia Duleep Singh’s defiant and innovative existence. Anand’s timely biography is a wonderful testament to Sophia’s lifetime of commitment to Indian independence and the advancement of women, and to the range and courage of her achievements.’
Rachel Holmes, author of Eleanor Marx

‘A fascinating and elegantly written life of one of the unknown giants of women’s suffrage.’
Katie Hickman, author of Daughters of Britannia

‘Sometimes you hear biographers complain that all the great figures have gone. They must either revisit the over-documented giants of the past or else make do with vaguely interesting obscurities. In this book, her confident and compelling debut, the BBC journalist and presenter Anita Anand leaves that argument in shreds… Anand has triumphantly rescued Princess Sophia from the pampered oblivion in which a fearful Raj sought to bury her.’
Boyd Tonkin, The Independent

‘Anand is a strong, confident writer and has amassed some excellent research, …packed with more than enough good stories and characters to be a rollickingly enjoyable read: a comprehensively researched and zippy account of a profoundly unusual life.’
Alex von Tunzelmann, London Evening Standard

‘Anita Anand’s gripping book is… a truly fantastical life-story covering India and Britain, war and peace, the personal and the political, with a liberal number of deaths, scandals and exotic jewels… fast-paced and thrilling…a noble book.’
**** Lucy Worsley, Telegraph

Editor’s Choice – Book of the Month
The Bookseller 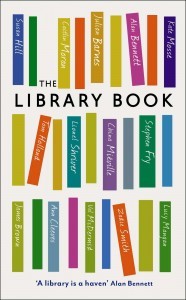 Using memoir, history, polemic and some short stories too, The Library Book celebrates ‘that place where they lend you books for free’ and the people who work there. All royalties go to The Reading Agency, to help their work supporting libraries.

A calendar of forthcoming literary festivals/talks can be found here …